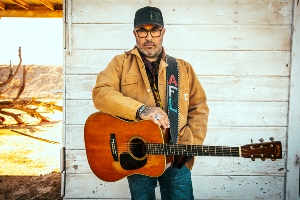 Throughout his more than two-decade career, whether topping the charts as front man of hard Rock heroes Staind, or his second act as a No. 1 artist on the Country charts as a solo artist, Aaron Lewis has always been painfully honest in his music.

He is 100 percent open, as he has to be, about his stunning new collection, STATE I’M IN.

"The songs I wrote on this record, they were some dark times," he says. "The state I'm in is not Mississippi, or Texas, or Massachusetts, it's more about the emotional state I'm in and everything I've surprisingly talked about in this interview. I'm always surprised by what comes out of me. I'm always surprised by the overall content of a record. It is a flow of consciousness."

That consciousness led Lewis to the most vulnerable record of his career.

For Lewis, who remains on the road year-round, new songs are the most exciting way to spice up the live set and, as he puts it, "Hit the refresh button." So, he's been playing several songs off STATE I’M IN and has been very excited by the response.

Maybe it is fitting in the dark times that led to this record, Lewis finds his salvation and hope in playing the new material live. As he says, in his powerful honesty, music is the one thing that has kept him going all these years.

Tickets are $70, $55 and $35 plus tax and an online/phone ticketing fee (this fee is waived when tickets are purchased in the Gift Shop). Tickets in the ADA section are for patrons with mobility disabilities and up to three companions. If companion seating is not available because the ADA section is sold out, RCGR will offer other seats as close as possible to the accessible seat, if available, at the purchase price of the other section.  Tickets are on sale in the Gift Shop, by calling 877-677-3456 or online.